Behind the Scenes at the One and Only Bryant Denny Stadium

It is the heart of our one and only Tuscaloosa, visible from almost everywhere in town and the center of sports and fun: The University of Alabama’s Bryant-Denny Stadium! Home of the Alabama Crimson Tide football team, it turns into the ultimate hotspot in town during football season. It doesn’t stop there, as it is a special location year-round! We’re going to show you why and take you on the behind the scenes tour through Bryant-Denny Stadium! 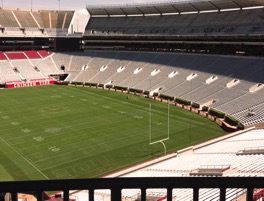 First view of the field on our Bryant-Denny Stadium tour.

For somebody who has never been to the stadium, even standing in front of it is mind blowing: The walls rise so high, you can’t seem to wrap your mind around this massive building! It was named after UA’s former president George H. Denny and longtime coach Paul “Bear” Bryant. Entering the stadium at the south end zone, the first stop of the tour is the Donor Hall of Recognition, which is located right above the entrance. Here you can see all the generous donors that supported the UA Athletics Department with donations of one million dollars or more on beautiful portraits! The Crimson Tide Foundation itself gives away $16 Million of athletics scholarships every year, supporting young people in sports like football, baseball, soccer, golf, tennis, rowing and much more!

Next, on the tour you walk around the field on an upper level, getting a first glimpse on the field and the breathtaking view of Tuscaloosa from above the treetops!
While on the upper level, we learned some interesting facts such as Bryant-Denny-Stadium was opened in 1929 and meanwhile has a capacity of 101,821 seats – which makes it the 8th largest stadium in the world! Also, during a game day, the stadium puts out 10,000 gallons of fountain drinks and 18.000 bottles of water to go with the concessions, leading to a total of 1 ton of trash! 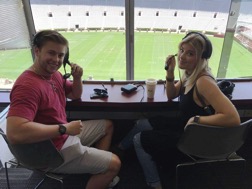 Interns Deven Wilson and Ella Waldrop in the press box.

Up next is the press-room: Here you can see the seats for the reporters behind a giant glass pane with a perfect view of the field and you even can take a seat on the commentator’s chairs! Located right next to it is the Presidential Box: An incredibly lavish lounge with seats for 200 of the UA president’s closest friends. On the other side of the ranks, you can see another row of windows that contains the 159 Sky Boxes: Private lounges with up to 75 seats that can be rented – for the trifle of a $500,000 donation to get your name on the ten years long waiting list! You better hurry up to make your reservation!

In the maze of the inside of the stadium, the tour shows you The Zone, located right above the north end zone with a view on the Walk of Champions. Members can access that beautiful hall during games and it can also be rented for events, even for wedding receptions! Say I do and Roll Tide!

Then the tour finally enters the holy halls: The Crimson Tide’s locker room!

Touching the nose of Bear Bryant for good luck!

Standing in the huge room with the noble wooden lockers and leather stools, you can literally feel the Tide’s spirit!

Lockers of the players set up before the game

Doing it like the players, you have to rub the nose of the Paul Bryant plaque and hit “WIN” above the doors before leaving the locker room for good luck! Then your way leads through the famous tunnel straight onto the field! You feel so incredibly small standing at that gateway, even without a hundred thousand fans cheering for you! And have you ever realized how gigantic the field goal is? You sure will do when you stand right underneath it! 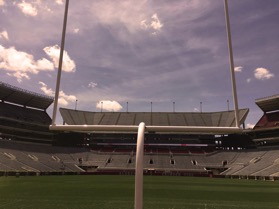 Standing under the goal post at the end of the team’s tunnel!

Walking around the field, you can take pictures that are memories for eternity. Side fact: It takes 120 hours of work and 500 cans of dye to paint the lines and signs on the field! Right across the Crimson Tide’s tunnel and locker, you can enter the one of the most iconic locations in the stadium: The Fail Room – which is nothing else than the locker room for the visiting teams. You can’t miss the obvious differences to the Tide’s locker room. But still, Alabama has one of the nicer, almost luxurious visitor locker rooms with stools and white walls – compared to Iowa, who for example painted theirs bright pink because of scientific proof that staring at it induced bad headaches.

And with that fun fact, the amazing tour comes to its end and leaves you feeling like a champion! Roll Tide!