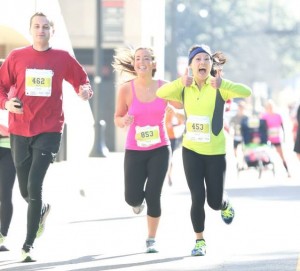 TUSCALOOSA, ALABAMA – Tuscaloosa is the fifth largest city in Alabama, with a population of over 95,000, according to the city’s official website. Located on the Black Warrior River, the presence of the University of Alabama in Tuscaloosa makes the city a regional hub for industry, commerce, healthcare, and education. The school’s presence creates a strong appreciation for athletics and physical fitness in the community that goes beyond the hugely successful University of Alabama football team. In fact, in 2008,

The infrastructure of Tuscaloosa indicates the community’s commitment to being runner friendly. Three major parts of the city, downtown Tuscaloosa, the City of Tuscaloosa Riverwalk, and the University of Alabama campus, are all connected by a series of sidewalks and trails. The esthetic beauty and connectivity of the sidewalk system between these three different areas of town create a multitude of route options and lengths. Tuscaloosa residents can practically run from any point in the city to another.

Tuscaloosa has gone out of its way to support running in the community. The local government has hosted annual races including the Mayor’s Cup 5K benefitting their charity partner, Tuscaloosa Pre-K. To increase participants at the Mayor’s Cup 5K, the city offers comp time to employees that participate. The city is also a major supporter of the area’s largest race, the Tuscaloosa Half Marathon. Local law manages road closures and provides the manpower necessary to properly execute most races by providing a high level of safety and hospitality.

The Tuscaloosa running community has good support from local businesses. Taziki’s, Five Bar, Billy’s, and Southern Ale House, have donated food and drink to runners after group runs each month and provide a spot for post-run gatherings. Additionally, The University of Alabama’s campus buildings are open to the public during business hours for those in need of a restroom or water, cover during bad weather, or a safe location. Along the Black Warrior River, the most popular trail in the city, several business are open to runners as well.

The Tuscaloosa Track Club (TTR), who submitted the application, is the largest running club in Western Alabama. TTR has served as a liaison between public and private organizations for many years, bridging the two sectors to create a unique partnership. Club President Ed Freeman and many other Club members have donated countless hours to serve as consultants for new and developing races in the area. In partnership with City of Tuscaloosa, the TTC works together to put on several large-scale events each year. These races bring in large participant fields to Tuscaloosa and put countless dollars back into the community.

“When it comes to being runner friendly, we are dedicated to setting the bar high,” said Walter Maddox, Mayor of Tuscaloosa. “I can assure you we will continue to work to make Tuscaloosa a safe and welcoming haven for all runners.”

For more information, contact Brandt LaPish, Director of Communications and Public Relations for the TTSC, at 205.391.9200 or blapish@visittuscaloosa.xyz.