International Museum Day is a holiday that shouldn’t be overlooked! May 18th, the whole world celebrates and values the importance of museums for the development of society. A museum stands for cultural exchange and enrichment, mutual understanding, cooperation and peace among peoples. As Tuscaloosa is a city with a long and rich history, important cultural legacies and a prosperous art scene, there are numerous amazing museums in town that are worth a visit – not only on National Museum Day! These are our favorites:

Tuscaloosa Museum of Art
This former private collection, amassed by Jack Warner, turned into a Museum in 2003 and is truly a treasure within the community. You can marvel at approximately 1000 pieces of fine and decorative arts, and also the building itself is special: It’s an Asian-inspired complex that also contains a beautiful garden! As the “Home of the Westervelt Collection,” the museum holds one of the greatest private collections of American Arts in the nation.

Mercedes-Benz Visitor Center
Even if cars are sometimes more of a man’s passion, this museum is worth a visit for everybody! Take a short drive east of Tuscaloosa and enter the ground of Mercedes-Benz U.S. International – the only Mercedes factory in the United States! The visitor center is located in its own building and contains the museum and a souvenir shop. Stroll through the stunning exhibits and discover the history and tradition of this classic car brand, and you will walk dreaming of owning a beautiful Mercedes! German engineering meets Southern hospitality – a successful combination!

Alabama Museum of Natural History
Usually, the huge dinosaur bones in the Alabama Museum of Natural History don’t come alive like they do in Hollywood, but it doesn’t make this museum any less exciting! For more than 150 years, it offers permanent and temporary exhibits, collections and programs to learn everything about Alabama’s fascinating natural history! Among the obvious highlights, like the dinosaurs, there are many exciting things to discover. Recently added: An Augmented Reality sandbox, in which you can create topography models out of sands that are then augmented by a digital simulation! Give it a try and go explore!

Paul W. Bryant Museum
One of the most important aspects of Tuscaloosa Culture is, of course, football! When it comes to fall season, dixie’s football pride is present all over the city and everybody comes together to be a part of the gameday experience. To feel that spirit even in the off season, you shouldn’t miss a visit to the Paul W. Bryant Museum! It opened in 1988 and since then, houses the history of Alabama football, with a special emphasis on the legendary coach Paul “Bear” Bryant. Permanent and changing exhibits, including Bear Bryant’s original office, can be visited daily from 9 am to 4 pm – just as on National Museum Day on May 18th!

Children’s Hands-On Museum of Tuscaloosa
You can’t start early enough to introduce your kids to arts and culture! Take the National Museum Day as an occasion and take them out to Tuscaloosa’s Children’s Hands-On Museum. This unique museum in downtown is tailor made for the little ones, to introduce them to arts, crafts, and exciting exhibits in an interactive and exploring way! It provides fun for kids of all ages and they will never ever get the idea of calling a museum boring afterward!

It might not apparent at first, but Tuscaloosa is a city with a fascinating and rich history! While Alabama Football’s history is rich enough for an article all its own, this is not one of them! There are scenic old mansions, hidden gardens, Native American history and even ruins to discover in the one and only Tuscaloosa! Let us take you on a short trip through town on which you can you can see, touch and live Tuscaloosa history!

1.) Moundville
Let’s start furthest back in time: The most represented Native Americans in Alabama were the Mississippians. The mound building culture settled their second largest town down by the Black Warrior River in Central Alabama and it was an important political and religious center back in the height of their era! Since 1999, you can discover the ancient lives of the Mississippians in their former village at the Moundville Archeological Park and Museum, 20 minutes south of Tuscaloosa. Marvel at unearthed treasured found on the site, stroll through the mounds and learn everything about the culture!

2.) Capitol Ruins
You probably wouldn’t expect to find ruins in the middle of downtown, right? Just follow University Boulevard to the west end of downtown and you will find the stunning capitol ruins. Before the capitol of Alabama had moved to Montgomery in 1847, it was located here in Tuscaloosa! After that, the majestic building served other functions, until a fatal incident in 1923: It was accidentally set on fire and nearly completely burned down. But that left us one of the most magical places in town today: The ruins still show the capitol’s stone foundation alongside a few wall fragments.

3.) Paul W. Bryant Museum
As the hometown of the University of Alabama, Tuscaloosa will forever be connected with football, the most successful department of the UA Athletics! The Crimson Tide is 26 times SEC Champion and 16 times National Champion – no need to explain the fascination for football itself! Aside from everything around Bama’s most legendary coach, Paul “Bear” Bryant, the museum also offers an exhibit about “The Tide through time”, beginning in 1892!!

4.) Battle-Friedman House
This Building is a hidden gem in Tuscaloosa, and also has an impressive story to tell – a piece of history in his nicest appearance! Built even before Civil War, in 1835, it is one of the oldest mansions in town! The North Carolina native Alfred Battle and Hungarian Bernard Friedman, who bought it from Battle in the late 19th century, served as the house’s namesakes and created themselves a monument. The House and its beautiful gardens can be visited for a small admission and also be rented for private events. It has even served as a location for music videos! The scenic beauty of this house is just undeniable.

5.) Denny Chimes
This legendary campanile in the center of UA campus has been an emblem for not only the University but also for Tuscaloosa as a City for almost a Century now! Since it was built in 1929, the chimes traditionally ring every 15 minutes and also play other songs. Surrounding the tower is another piece of UA history: The walk of fame, where captains of the football team have placed their hand and footprints in cement since 1948. It is worth to take a closer look next time you stroll by – you’re going to feel the history!

Tuscaloosa is home to the only Mercedes-Benz museum outside of Germany and for over 20 years, Mercedes-Benz has been manufacturing some of their most popular automobiles right here in Tuscaloosa County. Currently, the plant is responsible for building the GLE SUV, GL SUV, the C-Class and the GLE Coupe for the North American market.

The Visitor Center, which originally opened in 1997 and was recently renovated a little over a year ago, has exhibits that displays the history of the German automaker. This architectural showcase brings to life the company’s vision of producing the finest automobiles in the world.

The Visitor Center is an evolving, interactive tour through some of Mercedes-Benz’s greatest innovations and future automotive technological concepts. It includes vehicles ranging from a model of the 1886 Benz Patented Motor Car, recognized as the world’s first car, to the brand new 2016 GLE Coupe SUV. The museum also features iconic, classic Mercedes-Benz automobiles, authentic Mercedes-Benz race cars, a Mercedes-Benz “peerless safety” exhibit, and a gift shop.

The center is divided into five areas that tell the story of Mercedes-Benz vehicles: innovation, performance, safety, vision and design. The Visitor Center is also a key component in the company’s new immersion program. On a weekly basis, this program brings people who work for Mercedes-Benz and its dealerships to Vance to let them learn about the company’s vehicles, history and culture, tour its facilities and test drive its vehicles.

The Visitor Center is open Monday- Friday, 8:30 am- 4:30 pm and admission is free. Factory tours are also available, but must be reserved in advance.

Be sure to visit The Mercedes-Benz Visitor Center at 6 Mercedes Drive, Vance, AL 35490. For more information, visit mbusi.com/visitorcenter 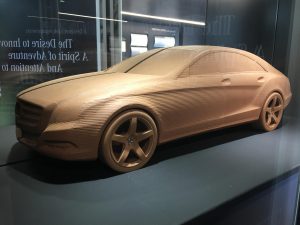 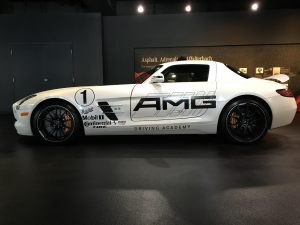 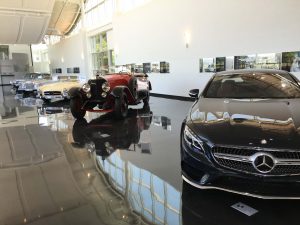